A downloadable game for Windows and macOS

Fix-It Felix Jr. was one of the most popular 2D platform games ever made. Launching in 1982, it became a pop culture sensation thanks to its colorful 8-bit graphics, simple controls, and addictive gameplay. 38 years later, it's time to re-live those arcade days on your beloved Commodore 64.

Defend their rights and help them fulfil their potential, from early childhood through adolescence.
Fix-It Felix Jr. is a Charity project. The game is free to download, but every donation will go to UNICEF.

The inhabitants of this quiet place made a huge mistake when they decided to bulldoze Ralph's home in the forest to build an apartment block. Now he is raging and destroying everything around him! Fortunately, Ralph's arch enemy, Felix Jr., has to come to the rescue... He must use his magic hammer to repair all the windows that the giant keeps breaking!
Unfortunately, climbing a tall building is hard enough without an angry villain attacking you! The brave protagonist of this story needs your help...Give him a hand to fix everyone's windows and put a stop to the mayhem going on in town!

However, no noble mission is easy to accomplish! The intimidating Wreck-It Ralph is waiting for you at the top story of each level. He will throw bricks at you and try to stop you from repairing the building. What is more, you need to watch out for unexpected obstacles during your ascent... Even ducks can make you lose a precious life!

The game consists of multiple levels, where you find yourself at the bottom part of the screen, while Ralph is above you, throwing bricks around in rage. Your mission is to fix all the windows in sight without falling off.
What is more, you need to make sure you don't run out of time! Check on how much time you have remaining by keeping an eye on the timer clock at the top of the screen. Here you can also see your current score and how many lives you can count on. Make sure to move swiftly and carefully! Once you lose all your four lives, you have to start the game from the very beginning!

Thankfully, the citizens of Niceland love Fix-It Felix Jr.! You will see them pop up in their window from time to time, leaving a piping hot apple pie for you. Yum! Pick it up as fast as you can, as it will give you extra points, invincibility for a short time, plus the ability to smash through bricks, piles, and even teach those pesky ducks a lesson. Teach two ducks a lesson while high on pie to triple the score, that's the cherry on the top! You'll need all the points that you can score, as you'll get an extra life every 20,000.

Fix-it Felix Jr. runs on an unexpanded Commodore 64 and only requires a joystick in Port Two. The game has been tested and it is compatible with the following platforms
Commodore 64
Commodore 64c
Commodore 128
Commodore 64gs
Commodore 64sx

Both PAL and NTSC systems are supported.

This is a masterpiece! :)

I wonder about the level selection: it is possible to choose levels 1-16, but it looks like 16 is not the last level, but the game does get harder even after that? If one starts at level 16, it looks like there will be two birds and two balconies, but after a few levels, the number of balconies will go up to four.

I wonder if there is a level limit after which all the levels will be of equal difficulty, or will the game get harder indefinitely some way? (max bird speed seem to be a little bit faster also in after level 16)

Yes, that is the game difficulty in general. Every time you clear a floor, the difficulty increases a tiny bit. Birds get faster, Ralph gets faster and spend less time in "angry mode", so you don't have much notice before he starts throwing bricks, and various other little things. The maximum difficulty is at level 48. Now normally if you start from level 1, you might not get to level 48 because you complete the game before (999999 score). Starting from level 16 will make it possible to experience the highest difficulty level. But good luck with that!!!

Great game. Simple and fun. My son loves it.

I've been playing this with the kids, great old style arcade fun, very playable and has a real one more go feel to it all. Top notch game, and well worth dropping a few pounds to a good cause

A very cool and funny game with beautiful and colorful graphics, the animations and sound effects are great and it works perfectly on my The C64 full -size. Don't hesitate to remunerate the author, it's for a good cause !

A great conversion - was delighted to do some playtesting for this game.  Decided to do a Low-Score challenge video (I like to do things a bit differently to other YouTubers) - check it out if you like:

I can't convince the game to get past the loading screen. I'm sure I must be doing something wrong. I'm using RetroArch to load the prg file using the VICE fast core. I have an Xbox 360 gamepad assigned to port #2. Should this be working under this configuration?

Pure joy ! Kids loved it. Looking forward for other titles from you.

this game is great anyway, I might port this onto my arcade cabinet that glitched out. thank you for helping me fix it pal! the only problem is that it wont run on laptop. it'sa how I  test things. I sold my C64  3 years ago. :/

This game is awesome, it catch all the good things of the original and blast them into our C64.

Huge congratulations to everyone involved - a great piece of software...

I played Commodore 64 is really great.

Not sure what kind of emulator you used, but the speech is very distorted.

Try vice for perfect emulation or, even better, run it on a Commodore 64!

I write in the Description under each film ;)

"Ps. If there are any slowdowns, jumps, clipping, I apologize in advance, but the games are played on real devices connected to the image relay, later to the PC and recorded in the program."

Such a great game ! Thank you !

Okay, I've now had a chance to play and this game is SOOOOO authentic in that old arcade game feel.  Awesome work as ever Tony and gang.
You should all be proud!

Thank you very much, my friend. Glad you enjoyed it. :-)

Thanks to all the people who donated!
We raised 750 pounds in the first 24 hours.

Donated... And let me tell you, I am really enjoying this game. You guys did an OUTSTANDING job on this and it is truly fun and addicting.

@Brokenbytes bought it and loved it really nice, I made a real tape and knocked up a tape case inlay and label anyone who's a member of the FB Commodore 64/128 group can download 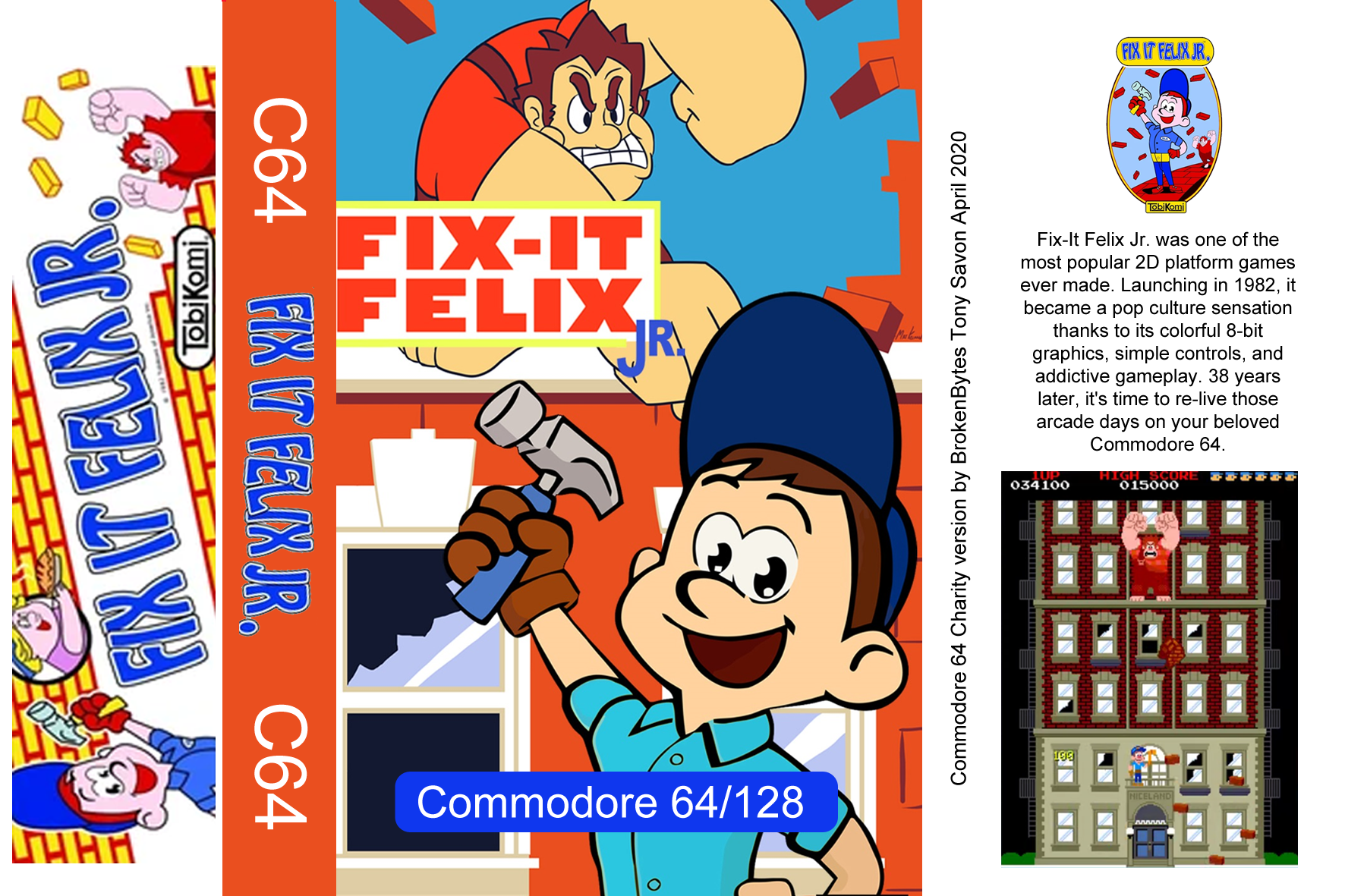 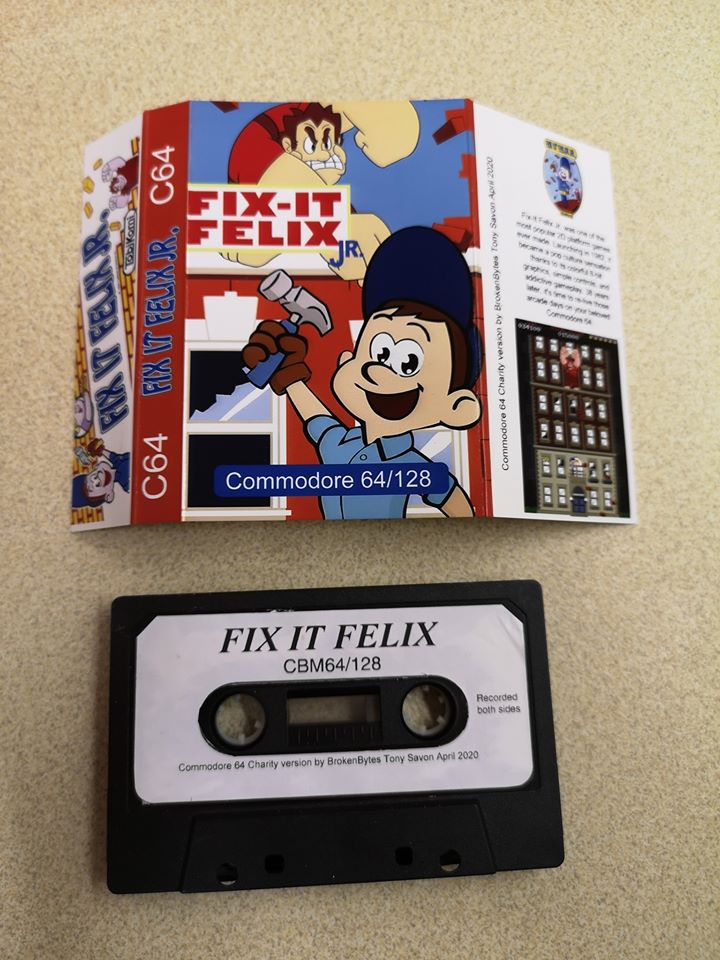 Wow thanks. That surely looks amazing

You did an amazing job on the game, it deserved a nice case and I have a thing for real tapes! Loved the loader :)

Thanks!
Some people have reported poor speech for the cutscenes and the intro-screen on the ultimate64, but not for the in-game speech. So let me know your experience.

Reply
Richard of TND152 days ago

Funny you say that. I played it on theC64, and also Ultimate64 (with ultisid) and I could hear the speech very clearly. :)

My time of game & on my favourite machine!  - Brilliant!

There is a level selector under of the initial menu of the game. The last levels are the most difficult.

yeah, I'm aware of that level choice and I tried some different levels already.
What I meant was something else: easy game with Ralph and birds trying to avoid you (for kids (ok kids today are better than me)), normal game with them following predefined movements (like now), hard game with Ralph and birds showing some advanced AI making it impossible even to repair a single window! I know Antonio is able to do that :)

The number of levels have colors that indicate their difficulty (green is easy & red is hard). I think you really means that would there are also extra levels that have a difficulty greater than the default 16 levels.

Thanks Ze :-)
As Ofihombre says , you can select difficulty level 1-16 at the beginning. 16 is quite hard already, and you get multiple birds, a fast Ralph and several obstacles on screen. From there, it only gets worse!

I'm no expert in C64 programming but the intro sequence seems pretty impressive for the system. I wrote a piece about it for the next issue of K&A Plus :)

Thanks!
I'm a big fan of the magazine and I'm looking forward to reading your piece! The intro was not straightforward, mostly because I wanted the game to fit in a single load. But happy about the result.

Nice Commodore port from the main Wreck-It Ralph game. But 1982 it's a date from the movie, in the real life, Fix-It Felix jr. it's made in 2012 for the Disney promotion of the first Wreck-It Ralph movie, but obviously this game hasn't aged so badly that its movie sequel (Ralph Breaks the Internet), and it seems to be in the cult.

By the way, on my itch·io profile has several Wreck-It Ralph fangames & even a indie game with a very similar style in development.

Everybody knows it's a fictional '82 arcade game from a 2012 movie. The original 2012 version states 1982 so why shouldn't this conversion?

Amazing conversion for the C64. The developers must have put hundreds and hundred of man-hours into it. Can't help thinking what could have been if other arcade games from the early 80s era had been given as much C64 conversion care as this ...

The thing of "is fictional" already sounds like something typical of the officialist world. But seeing so many real versions (unofficials) of this game, it lose a lot of the meaning that it's fictional.

It was clear that it was originally intended to be fictional, but it doesn't take away from the fact that there are real & playable adaptations of Fix-It Felix jr to pay tribute to the movie.

Its existence would have been much more accepted and verifiable if it has really been in 1982 by Tobikomi instead made by Disney in 2012.

I would guess that it is the fictional-arcade-game thing that makes this game attractive in the first place. Especially when converted to a 1982 computers as the C64, which is home to a lot of early 80s arcade conversions. So, of course the developers want to play along in that makebelieve world.

The Commodore version it's more like one of several real adaptations of the fictional version of the game (Tobikomi it's obviously the most fictional thing about the game, since in his universe he was created by that company).

That includes the first playable version (the 2012 version) as well, which is by far the most faithful version to the movie version (I leave you an example video of this excellent playable imitation with its arcade cabin):

For us it will be real, but for history it never isn't real & won't it be.

Of course I have seen the cabinet and I played the original Flash game the same night I saw the movie.

Why are some people who misjudge my opinions about the controversial existence or non-existence of Fix-It Felix?

(I think I had a worse case on Wikipedia for not being anything notorious for having an article).

Awesome sauce! I'll be loading this up later. What a treat from my fave C64 dev.

Looking forward to your feedback! You take care, buddy. 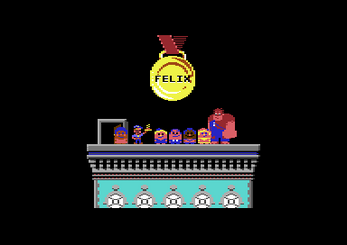 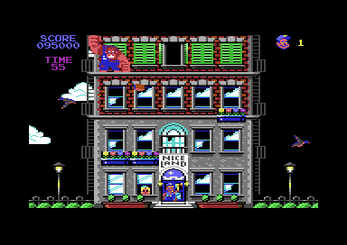 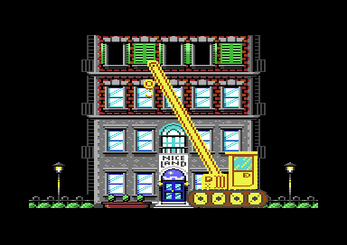 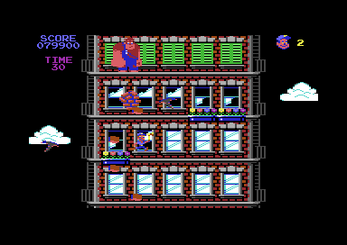